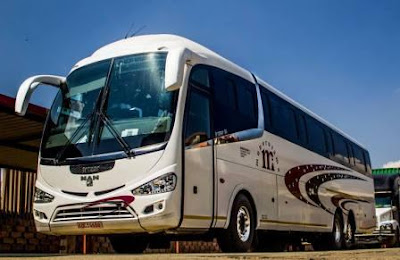 Munorurama Bus Is one among the oldest player in the transportation Industry for the Southern African countries. Being registered in South Africa, This bus company plays the long distance routes between South Africa, Malawi, Zimbabwe and Zambia.

They have invested much in Scania buses with Marcopolo bodies, Irizar Bodies and MCV bodies which are locally made in South Africa. All of their buses undergo scheduled maintenance just after a several trips.
Their Buses are of Semi Luxury Class with 2 by 2 seating configurations and some of them have 2 by 3 seating configurations. They are fitted with reclining seats with enough legroom, They have an A/C services, On Board entertainment like Television, Music System and many more.
They are available for Special Hire for those who used make special travel. Their buses available from 52 seaters up to 70 seaters.

Munorurama Bus offer public transport for long distance passenger in the Southern Africa Regions within South Africa and neighboring countries. They are also available for special hire to Individual groups or even social groups.