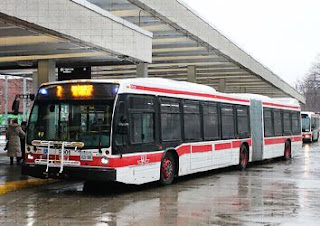 Most bus routes serve the suburban areas of the city, and are tightly integrated with the subway system, with free transfers between the two systems, and most suburban subway stations equipped with bus terminals located within the fare paid area. Several routes run into Downtown Toronto, where buses are less used and the area is instead served by the TTC's streetcar system.

Until 1921, several private and publicly owned transport systems were established and ended up being merged into one another or abandoned. Electric streetcars were widely used in Toronto and surrounding settlements during the new century. After the establishment of the Toronto Transportation Commission (TTC) (predecessor of the Toronto Transit Commission (also having the acronym of TTC) until 1954), streetcar routes were taken over from predecessors in 1921.

It ran bus routes by using motor buses for the first time in the city. The TTC also experimented the use of trolley buses from 1922 to 1925. Gray Coach, an intercity bus line by the TTC, began operation in 1927. As the coach service increased in ridership, the TTC built the Toronto Coach Terminal.

By 1933, the TTC introduced the local bus and streetcar stop design, a white pole with a red band on the top and bottom. Throughout the 1930s and 1940s, the city began replacing various street railway routes extending to surrounding municipalities with bus routes. Between 1947 and 1954, the TTC acquired new trolley buses and converted several streetcar routes to use them.

Most buses (aside from the 62 feet (19 m) articulated Nova LFS buses) are 40 feet (12.16 metres) long. All buses are used in local and express (including BRT) service and are equipped for wheelchairs..

Wheel-Trans operates a fleet of 320 active vehicles. Not all vehicles are the same length, but all of the vehicles are not in over 40 feet in length.

Numbering of buses prior to 2013 used the same four-digit format as the TTC regular fleet. Starting in 2010, Wheel-Trans' newer buses used a numeric format starting with W and followed by three digits.

TTC (Toronto Transit Commission) is a public transportation provider in Toronto which operates Bus routes since 1921.

Their Bus routes cover an area from the Airport Rd At Morning Star Dr stop to the Starspray Loop at Lawrence Ave East stop and from the Major Mackenzie Dr East at Markham Rd stop to the Long Branch Loop stop.

The TTC has Bus routes operating across Toronto including: Markham, Mississauga, Toronto, Vaughan.

The longest line from the TTC is: 300. This Bus route starts from Pearson Airport Terminal 3 (Columns C8-C12) (Mississauga) and ends at North Service Rd at Eglinton Ave East. It covers over 39 km and has 116 stops.

The shortest line is: 102. This Bus line begins from Markham Rd at Select Ave (Toronto) and finishes at Markham Rd at Steeles Ave East South Side (Toronto). It runs through 1 km with 2 stops.

The TTC serves this area with a grid network of:
four subway lines;
11 streetcar routes; and
more than 140 bus routes.

Many TTC bus and streetcar routes operate all day, every day. The density of this grid is largely unchanged for 18 operating hours per day, thus providing transit services within a 5 to 7 minute walk of most areas within Toronto.

Multilingual Services
416-393-4636, (Daily, 8 a.m. to 6 p.m., except statutory holidays); Transit information in over 80 languages. Press “0”, and ask the telephone operator for your language in its English name. 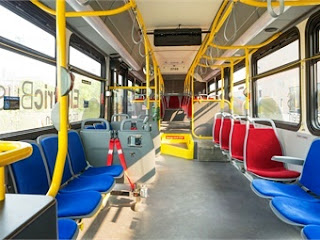