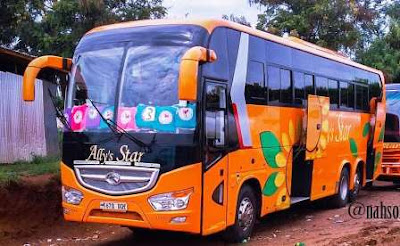 Ally's Star Bus Is a Tanzania Passenger transport company based in Mwanza region. They are specialized in a Passengers and Parcels transfer services from Mwanza city to other regions and towns of the Lake Zone ares as well as long distance travel to Dar es salaam and other towns.

The company provide transportation services for more than 10 years, They have started their business by serving the Lake Zone regions before expanding to other towns and cities in Tanzania especially the Central Zone and Eastern Zone regions.

The company have a variety of Bus brand from a Chinese bus manufactures, They also have a few Scania buses doing a local routes in the Lake Zone regions. Their buses ranging from Golden Dragon, Kinglong and Yutong models, All of these are newly imported from China.

Their Buses are Clean and smart, They uses a latest Technology and are comfortable for a long distance travel. Their buses are designed to cater for Traveler demand prevailing in the Tanzanian Markets.

Once You Have Chosen to travel with Ally's Star Bus, You will enjoy the following on board features and services:
2 By 2 Reclining Seats With Belts
USB Charging Port On Each Seat
Enough Legroom For Comfrt Travel
Television Services From Multiple Tv On Each Side
Modern Sound System With Self Speaker
Air Conditioning Services
Free Soft Drinks (Not All Routes)
Free WiFi Services

The company offer daily Passenger transfer services from Rock City (Mwanza) to other regions in Tanzania. They have buses to Dar es salaam, Tanga, Shinyanga, Tabora, Geita and other Lake Zone Towns.
They have a Morning departure for a Long Distance travel and afternoon departure for short distance travel for neighboring towns.

The company also transfer Parcel to all destinations where their Passenger buses used to go. Their prices are affordable to every one, and they are charged depending on the nature and size of the respective Parcels.

You can also make a booking of your Tickets online by making a call their offices or Agents through those contact numbers listed below this post. 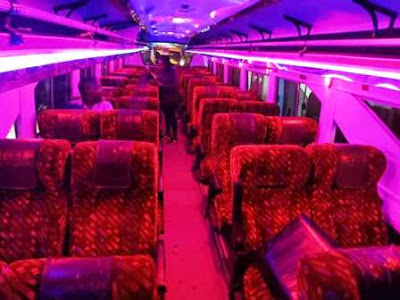