Kapricon Royal Class provide daily Passenger transfer services from the Business city of Arusha to other regions in Tanzania. They are in the transport Industry for more than ten years serving the Northern Zone regions.

The company have well established Customer base from Arusha City to Southern Highland regions, Central Zone as well as to Lake Zone regions. They are now expanding their services to the Eastern Zone regions like Dar es salaam, Pwani and Tanga.

The company is well known for their Scania buses which are most loved by those Young travelers. These Scania Buses are locally built by Tanzania Bus fabricators like Dar Coach and Quality Group.

But as the matter of time, Kapricon Bus Company have made an innovation to their Fleet list by adding a Chinese brands. Now they have a Chinese Yutong and Zhongtong buses in their list.

The Chinese brand are modern and much more comfortable than their old brand. Below are some features and services which are available on their buses:
Television Services For Entertainment
Sound System For Music Listening & Adverts
2 By 2 Reclining Seats With Enough Legroom
USB Charging Port
Sometimes AC services Available
Soft Drinks On Some Of Their Buses

They have only a Morning departure in all regions whereby a Passenger / Customer can make a booking of their Ticket on the travel date or prior to the date of travel.

Booking Of Ticket can be made at their offices which available in all bus terminal, their Agents and online by making a call to them through those contact numbers listed below.

The Company also provide Parcels transfer services to all destination at an affordable price depending on the nature and size of your Parcels. 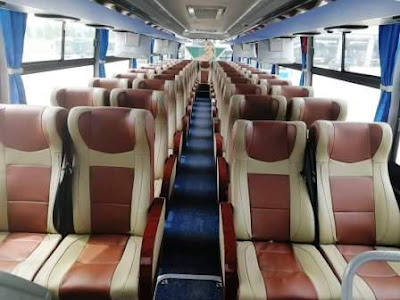