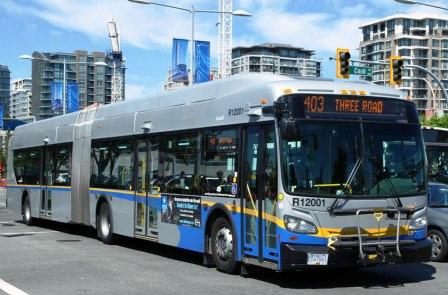 It is a wholly owned subsidiary of the South Coast British Columbia Transportation Authority, known locally as TransLink, the entity responsible for public transit in the region.

CMBCy was established on April 1, 1999, concurrent with the implementation of TransLink.

Bus service in Metro Vancouver was formerly provided by BC Transit (the provincial government crown corporation that operates transit outside of Metro Vancouver).

Coast Mountain Bus Trolleys
For the past 60+ years, trolleys have played a central role in Metro Vancouver’s urban transit network. Today, with a fleet of 188 40-foot conventional and 74 60-foot articulated trolleys.

CMBC operates the second largest and most modern electric trolley fleet in North America. Each trolley utilizes a network of overhead wires that span 315 kms through Vancouver and Burnaby, providing an environmentally friendly transit solution.

The company operates most bus routes across Metro Vancouver. West Vancouver operates its own municipal transit service and a select number of Community Shuttle routes are contracted out to First Transit.

Coast Mountain Bus Company’s services are:
Regular transit service
Trolleybus service in the City of Vancouver (with one route extending to Burnaby)
B-Line, a limited-stop bus rapid transit service
Community Shuttle, a minibus service that connects areas that have a lower demand for buses
ExpressBus, a suburban express transit service
NightBus, a late-night bus service that runs after midnight up until early morning
SeaBus, a passenger ferry service

Introduced in September 2000, the Community Shuttle was a cost-effective solution to providing bus service on routes that had low ridership and were expensive to operate.

The Community Shuttle service maintains transit coverage while operating a smaller vehicle with lowered costs and serves as a method of traffic calming in quiet, residential areas.

Initially introduced in the Burnaby Heights area, the Community Shuttle service has expanded to operate in every city in Metro Vancouver,
both as a replacement for low performing routes and as new service in communities that lacked transit service.

NightBus routes meet in downtown Vancouver and operate about every 30 minutes or better, seven days a week.

NightBus routes are identifiable with the letter N in front of the route number. On maps and signage, they are marked with a dark shade of blue.
In total, there are ten NightBus routes.

Coast Mountain Bus SeaBus Services
Introduced in 1977, the SeaBus is a passenger ferry service that connects Waterfront Station in Vancouver and Lonsdale Quay in North Vancouver across the Burrard Inlet with a crossing time of about 10 to 12 minutes.

Service operates seven days a week and every 15 minutes for most of the day and every 30 in the early morning and late evening.

Cycling Services
Cycling can be the fastest way of getting around, especially in more urban areas of Metro Vancouver. It’s also one of the healthiest and most enjoyable ways to travel.

TransLink is committed to making cycling a realistic travel option by providing funding for municipal bike routes and making it easy to connect with our transit services by bicycle.

Coast Mountain Bus Compass: Load. Tap. Ride.
Compass is the reloadable fare card that works everywhere on transit in Metro Vancouver. It’s convenient, easy to use, and secure. Simply load Stored Value or a pass onto your card and tap your way across the system.

Where to load: Load your Compass Card online at compasscard.ca, at a Compass Vending Machine or by phone at 604.398.2042.

Compass Cards can be loaded with the fare product of your choice including Monthly Passes, DayPasses, and Stored Value. View our fare prices.

There are two types of Compass Cards; Adult and Concession:

Blue Adult Compass Card
The most commonly used card, It can be loaded with pass products or Stored Value for pay-as-you-go trips.

Compass Cards can be purchased at compasscard.ca, by phone, at retailer locations or from a Compass Vending Machine (Adult Cards only).

$6 Refundable Card Deposit: Compass Cards cost $6, which is a refundable deposit, meaning that if you no longer need your card you can return it to us at one of our customer service locations or by mail. Visit our Refund Policy page for more information.