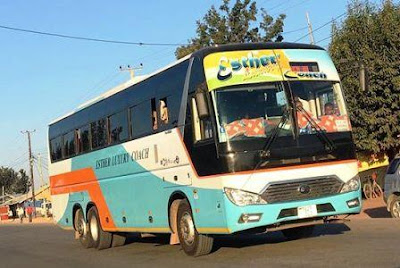 Esther Luxury Coach Is a Bus operator serving the Central and Northern Zones from Dar es salaam city. They are in the Industry for about Ten years providing the best services among travelers who used to travel with them.
This Company have daily Morning departure in all cities and towns where they used to go,  It is one among the few companies which travell to towns-ide of the Singida region.  Their buses are available for Public Transport as well as Private Hire fro different groups of people.

They are one among the intercity passenger transfer company which own only Chinese machines, They do their daily operations with Chinese Yutong buses with a good number of latest fleet. According to LATRA, Esther operates Semi Luxury buses which offer a comfort travel among customers.

The Company offer a wide range of on board services and features to their passengers to make them traveling on styles and comfort. Below are some of the features and services offered by Esther Luxury Coach:

They offer daily passenger transfer from Dar es salaam city to Kiomboi in Singida and Tarakea Rombo in Kilimanjaro regions. They have only a morning departure in all cities and towns with the booking offices available at the Terminal for easily access.

They also have their offices out of the bus terminal where you can go for help as well as for booking of your Tickets. They also have an Agents who can help you for booking process at all stops where their buses used to pass through their destinations.

You can also make a booking of your Tickets by making a call to them through those contact numbers listed below this post.