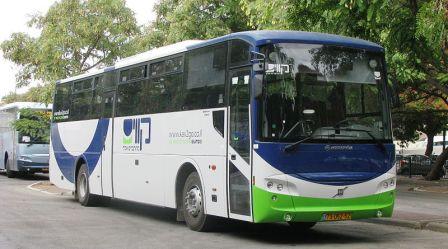 The company was established in 2000 as a partnership between Meir, a company for cars and trucks, and the transportation company Horn and Leibowitz, in the wake of the Ministry of Transportation’s decision to privatize public transportation services.

Since its inception, the company has been growing consistently, and today it supplies alot of the public transportation market, by bus, in Israel.

Kavim Bus operates in four active Clusters in the areas: Hadera-Netanya, Ono-Elad, Hashmonaim, Beitar Illit and Emek HaEla while the company is headquartered in Holon.

This company is currently fully owned by Meir Car and Truck Company Ltd. In 2011, Kavim merged with Elite Transport Ltd. thus enlarging its fleet of buses.

The company has a fleet of about 1100 new buses and most of them are from Volvo, assembled at the Merkavim Transport Technologiesplant in Caesarea.

Their buses are modern and luxurious to give a travelers what they do expect from them. All of their buses has Air Conditioner, Television Services & Modern Sound system.

Kavim Bus has a wider range of fleet starting with a Minbuses to Standard Coaches including the Midbuses. Most of their minbuses are for the Rural areas transportation.

The buses regulated by the very highest standards and regulations both regarding the comfort of driver and passengers and environmental safety requirements.

The company operates public bus lines to Israeli settlements in the occupied West Bank and in occupied East Jerusalem.

The company won the Ministry of Transport tender to operate public transport from the Ono Valley-Tel Aviv area to Petah Tikva and Tel HaShomer.

Also they have a License to operate a cluster of routes in Afula, Bet Shean, Nazareth, Migdal HaEmek and its environs and the tender to run the Petah Tikva and Rosh HaAyin routes, including school buses.

They also provide transportation in the Heshmonaim cluster which includes the cities Ramla, Lod and Modi’in, and the tender for cluster of regional bus routes in the Netanya Hadera area. Kavim started the operate the routes in both clusters in 2013.

the company also has line in the Valley of Elah and Beitar Illit cluster that contains routes that Kavim currently operates and few routes of Superbus in the Beit Shemesh area.